Hatching a Love for Science in the Classroom

Some classrooms at Buchanan-Verplanck and Furnace Woods have been a little noisier than usual lately, but not with the voices of children: the high-pitched sounds of “peep, peep” can be heard in the hallways, as recently-hatched chicks have been making their presence known.

“The children learned that the eggs need to be kept at a certain temperature, humidity, and need frequent turning, as the chicks inside grew and developed,” said kindergarten teacher Dr. Jennifer LeFevre.  With the help of Mrs. Pio, the children learned how to “candle” the eggs, using a flashlight to help see the developing chick. “We were able to see blood vessels and eyes in some of the eggs, as well as see the chick moving inside,” said LeFevre.

At FWS, teacher Janet Rose brought eggs in for a number of classrooms at the school. The students learned about the life cycle of chickens and how to care for the eggs, carefully turning them multiple time a day.

After much anticipation, students at both schools were rewarded with the sight of baby chicks making their entry into the world. Whenever chicks hatched during school hours, students were able to peek into the incubators to watch as the baby birds pecked their way out of their shells.

In Lindsay Giacomantonio’s class at FWS, students were learning how to handle the chicks very gently and enjoyed taking them outside for some fresh air. “We haven’t named them yet,” said Giacomantonio, “but I’m sure that we will.”

The chicks will be leaving both schools at the end of May, with the chicks from B-V joining Mrs. Pio’s current flock, and the ones from FWS heading to a farm in upstate NY. 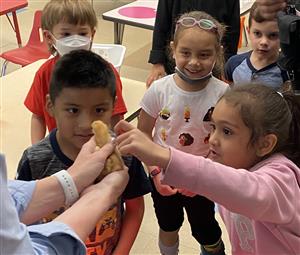