Supporting Troops with Words of Thanks and a Piece of Home

“You are the reason that I can sleep peacefully in my bed at night…keep going strong!”

“Your valiant efforts help keep the country safe and improve the lives of millions.”

“I wish you a safe journey through whatever you do next.”

These were a few of the messages students in Linda Cabral Marrero’s business classes at Hendrick Hudson High School wrote to U.S. soldiers stationed far from home. The letters were destined for care packages that are being assembled by the local organization United for the Troops.

Attached to each note was something surprising: a small plastic bag filled with soil.  Marrero had asked the students to bring in the soil, but hadn’t told them what it was for.

“We are going to send these bags of soil to soldiers who are putting their lives on the line to protect our freedom, far from home,” said Marrero.  “Listen to what one soldier said about receiving these bags,“ she said, as she read the following quote:

“I’ve never seen a care package that contains bags of dirt. We didn’t know what to do with them at first, but at some point, a few of us decided to carry them in our medical pouches on missions so that if one of our Green Berets was “expectant” we could sprinkle the dirt on the ground underneath them so that if they were to expire, they could die on American soil . . . your gift afforded us that potential honor.”

According to Marerro, the objective of the lesson was to teach the students about social responsibility.  After they finished writing their notes and packed them up with the small bags of soil, the students watched a video about how the most socially responsible corporations make giving back a core element of their businesses.

As for their own classroom exercise in social responsibility, senior Spencer Allen said sending the notes to soldiers was a "beautiful idea," and junior Gabby O'Mara said "it was heartwarming and made me feel good." 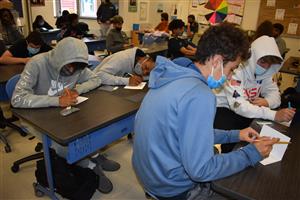 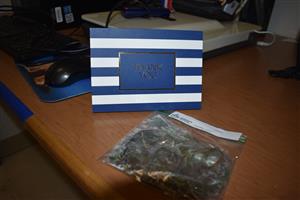