On November 15, three of Hendrick Hudson High School’s outstanding senior student-athletes signed their National Letters of Intent (NLI) to play at the NCAA Division I or II level:

Caroline Clark has been a four-year member of the Varsity Girls Lacrosse team.  She has been a three-year starter in the Midfield/Attack, where her versatility has been an asset to the program. She was a member of Hendrick Hudson’s 2021 Class C Section One Championship team.

Madison Porter has been a five-year member of the Varsity Girls Lacrosse.  She was a member of the 2021 Class C Section One Championship team and has been an All-Section selection in Girls Lacrosse. Porter has also lettered three years in Varsity Basketball and two years in volleyball, where she was a member of two Class B Section One Championship teams, two New York State Regional Champions and participated in two New York State Final Fours.

“Caroline, Amya and Madison are three tremendous student-athletes,” said Athletic Director Tom Baker. “They have worked very hard at their sport and have grown tremendously as leaders of our school.  I am very proud of them and am excited for what the future holds for each of them.” 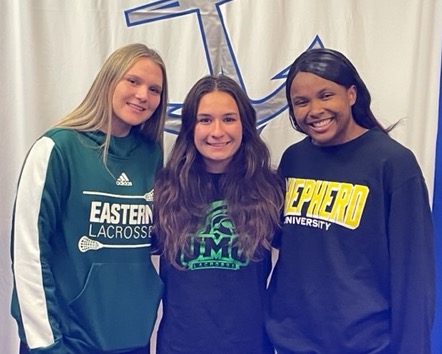